As is usual in such studies/research/polemics, they start off with the conclusion they want:

High levels of alcohol consumption and increases in heavy episodic drinking (binge drinking) are a growing public concern, due to their association with increased risk of personal and societal harm. Alcohol consumption has been shown to be sensitive to factors such as price and availability. The aim of this study was to explore the influence of glass shape on the rate of consumption of alcoholic and non-alcoholic beverages.[1]

Note that they start off with the premise that binge drinking in the UK is a growing public concern. Not that it is a growing problem, but that the public perceive it to be a growing concern. Since alcohol consumption in the UK has been declining since 2004 this is clearly a specious premise, and renders any experiment to measure the reality of something (drinking speed) when the problem is the perception of something(binge drinking) somewhat useless.

Lastly, they note that consumption has been shown to be sensitive to 'factors such as price and availability.' Economics 101. But alcohol is largely price in-elastic, meaning price changes don't affect consumption that much.

Onto the Methods of the experiment:

Whoops their experiment isn't modelling reality as well as it should be. In the body of the study they expand on these measures:

For the drinking session, participants were randomised to receive either 6 fl oz (i.e., half a glass) or 12 fl oz (i.e., a full glass) of lager at 4% alcohol by volume (Bière de France, Brasserie de Saint-Omer) or soft drink (7-Up, Dr Pepper Snapple Group).[1]

Lager and soft drinks, when sold in pubs which is the only place you can buy such beverages measured in 'fl oz' are sold in measures of 10 fl oz (or 1/2 pint to the rest of us) or 20 fl oz (1 pint.) [1 imperial pint is 20 imperial ounces - your results will vary if you go State-side]

On the other hand, if they're trying to address 'preloading' where people drink before they leave the house, then the measures are more likely to be on the order of 275ml(9.6floz)[3] for bottles or 440ml(15.5floz)[4] for cans. But of course, they're measuring the volume consumption when consumed from glasses:

Either way, measures of 6 fl oz and 12 fl oz do not represent standard drink sizes in the UK.

Social male and female alcohol consumers (n -> 159) attended two experimental sessions, and were randomised to drink either lager or a soft drink from either a curved or straight-sided glass, and complete a computerised task identifying perceived midpoint of the two glasses (order counterbalanced).[1]

The summary is unclear here. To clarify each participant had to 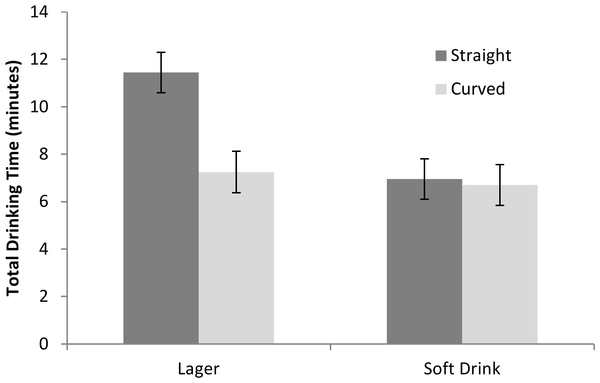 So putting a poncy French lager (which the participant might not like) into a straight glass appears to lengthen the time it takes to drink it while you're watching a boring documentary, longer than than it would take to consume if it were soft drink in there instead.

... Participants also misjudged the half-way point of a curved glass to a greater degree than that of a straight glass, and there was a trend towards a positive association between the degree of error and total drinking time.[1]

emphasises that they were all useless at judging the half-way point, regardless of the shape of the glass - the 'weird shaped' glass simply makes it more difficult to determine.

Glass shape appears to influence the rate of drinking of alcoholic beverages. This may represent a modifiable target for public health interventions.[1]

Clearly, if putting just over half a pint of Brasserie de Saint-Omer into a straight glass is going to make the person take longer to drink it than if

we need legislation to make it illegal to make, sell or use (even in your own home) non-straight glasses.

In the introduction, a rather worrying aspect is when they discuss the glasses currently in use in the UK:

There may be other potentially modifiable factors which may influence alcohol consumption and drinking rate. These might include marketing signals (i.e., branding), and vehicles for these signals such as the glasses from which beverages are consumed. Legislation to control or limit these signals may therefore influence drinking behaviour. A parallel can be drawn with the tobacco control literature, where plain packaging has been shown to increase visual attention towards health warnings compared with branded packaging in non-smokers and light smokers [9].

In particular, there has been an increase in branded drinking glasses in the United Kingdom in recent years, many of which include shape as a differentiating feature. These glasses include chalice glasses, curved beer flutes, tankard and novel curved beer glasses, and have been used by numerous alcohol brands including Stella Artois, Heineken, Guinness, Pilsner, Amstel, Smirnoff, Carlsberg, Carling and Jameson's whiskey. While alcohol advertising is still permitted in the United Kingdom, packaging and, by extension, drinking glasses provide another, currently unregulated, marketing channel.[1]

Plain packaging coming to a pub near you, along with the banning of beermats, beer towels, insignia on in-pub posters. No sign of the tobacco template in which Deborah Arnott claimed

Thirdly, the “domino theory” i.e. that once a measure has been applied to tobacco it will be applied to other products is patently false. [5]