In the UK there is currently (2018) a panic that there is an epidemic of childhood obesity. There isn't - it's all statistics being tortured in order to allow things like a sugar tax to be implemented.

However these figures are based on a torturing of the widely derided BMI (fails to differentiate between fat and muscle e.g.,) which is at best only a guide for adults (sportsmen and old people need not apply) but is totally unsuitable for children.

But it doesn’t work with children. Kids are not shaped like adults, do not have the same fat/muscle ratio and are growing. They rarely have a BMI over 30. An obese child can easily have a BMI of less than 25. Moreover, obese girls have different BMIs than obese boys.

To make up for this, clinicians use a chart like the one below which gives bespoke, age-specific and gender-specific BMI cut-offs for children. For example, at the age of six and a half, boys are considered obese if their BMI exceeds 20.2. By the time the boy is eleven, the cut-off has risen to 25.1. 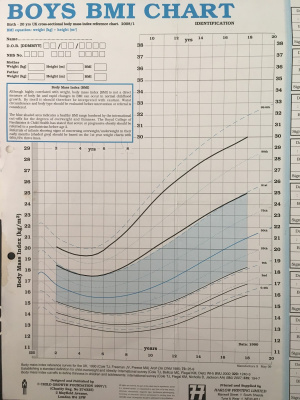 Taken together, this suggested that the obesity rate among young British adults circa 1990 was less than two per cent and that a realistic cut-off point for childhood obesity was the 98th or 99th percentile. In a later study, Cole and Lobstein concluded that ‘the obesity cut-off is well above the 98th centile’.

So that means we use the 98th percentile as the cut-off when estimating child obesity figures today, right?

To recap, the normal body mass index (BMI) cut-off of 30+ does not work for children so we have to improvise. The current British system defines children as obese if they have a BMI that would have put them in the heaviest five per cent of their age group in 1990.

There is no reason to think that kids who were in or above the 95th percentile (ie. the heaviest five per cent) in 1990 were obese, so why should we assume that kids who weigh the same amount are obese now?[3]