The title of the study Plain Packaging Increases Visual Attention To Health Warnings On Cigarette Packs In Non-Smokers And Weekly Smokers But Not Daily Smokers pretty much sums up the findings of the study which basically involved studying the (dominant) eye movements of 15 non-smokers (never smoked more than 100 cigarettes in their life), 14 'weekly' smokers (at least one per week, but not daily) and 14 daily smokers (at least one per day.)

Specifically, they measured how long people looked at the warning messages on both plain and branded packs, and the difference in amount of time between the types of packs and the types of smokers.

Participants were instructed that they'd be shown some images in the first phase of the experiment, and would have to indicate whether or not any images presented in the second phase were present in the first.

The first phase consisted of (randomly) 10 images of plain packs and 10 images of branded packs with 10 warnings (one per type of pack) present and each image was shown for 10 seconds.

The second phase, was 10 images from phase 1, and 10 new images (with each set of 10 having 5 plain and 5 branded packs, and 5 warnings,) and the participants given 5 seconds per image to decide if it was present in phase 1 or not.

Eye movements were tracked in only the first phase.

As summarised by the study's titile, they found that the non- and weekly- smokers tended to look at the warning more if the pack was plain than if it was branded.

Problems with the Bristol Study

Figure 1 Examples of branded and plain pack stimuli. Example visual stimuli designed speciﬁcally for the purposes of this study are shown. Branded pack images (top) were taken from popular ciga rette brands in the United Kingdom. Plain white pack images (bottom) were taken from an example plain pack created for Action on Smoking and Health (England)

The image is reproduced here, with the bottom (plain) packet cropped off (but not entirely,) and copied to the right of the branded packet: 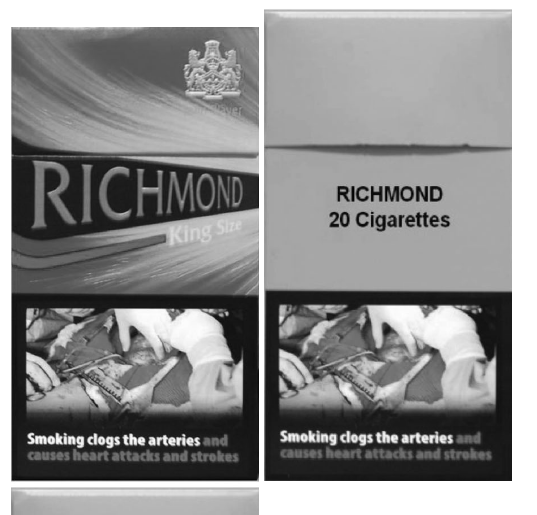 Note that (as apparently presented in the study) the packets are the same width, they are not the same height.

The number of participants (43, selected by adverts in and round the university campus,) while probably ideal for a feasibility study as to whether more research is needed, is pitifully small for a piece of research on which so many arguments about plain packaging appear to rest.

Additionally, for those relying on this study arguing for banning branded packaging 'for the sake of the children,' the average ages for the three groups were 23, 24 and 24 (for non-,weekly, daily respectively.) The youngest interquartile participant was 21, the oldest 28.

The male/female breakdown shows another skew:

Not that these actual numbers are actually presented in the study - they give percentages (71% of 14 daily smokers were male for example (which is 9.94.))