This is a transcript of the fax sent in 1995 sent by Simon Chapman to Adrian Farrant at the Westmead Hospital and Community Health Services, encouraging them to manipulate their figures because their research showed that SHS didn't increase the risk of lung cancer sufficiently to scare the general public.

See below for the actual scans.

There are pages altogether.

I have emailed the comments below to Woodward, Guest, Jamrozik, Taylor, Dobson. I don't have other members' emails - please fax to all others urgently.

If we look at Table 7 in the way any journalist would, in only two age groups (females 60-4 and 65-9), do the estimates go over 1 death. The lung cancer death aggregate therefore mostly consists of adding up fractions of one death in different age groups. What I'm getting at here, is that a reasonable conclusion will be the idea that there is ANY lung cancer caused by ETS in Australia will be seen as a huge joke. Journalists looking at that table (or being directed to it by the industry) will be hard pressed to write anything other than "Official: passive smoking cleared - no lung cancer"

If we feel confident that we are right, I think we had better get out a thesaurus and find a lot of words to express the words "conservative estimate" in hundreds of different ways.

Here are a few questions I think we will get:

1. Your figure of 9.6 deaths a year from lung cancer ... am I correct in saying you have added up a lot of fractions, nearly all of which are under 1 death a year? (much snickering)

2. In the USA last year, a report based on EPA figures estimated there were 62,000 deaths from passive smoking just from heart disease. The US has 14.6 more population than Australia -- I've calculated that Australia should therefore have 4,247 deaths. That's one hell of a difference... how do you explain your amazingly different estimate?

3. Much of your report recommends tightening restrictions on passive smoking in situations where adults are exposed ... such as in workplaces. Surely with your calculations of deaths being so low, these recommendations are way over the top?

I think we are looking down the barrell[sic] of a MAJOR public relations problem, not the least of which will be that we will find ourselves out of step with every international review's conclusions on this subject. I STRONGLY recommend that we convene another face-to-face meeting to discuss what to do about this.

I am very unhappy about turning the PR on this one over to the routine NH&MRC route -- I believe we should alert the NH&MRC to the huge banana skin we are about to put in its path and urge top-level strategic discussion of how to handle this.

“You clowns are such amazing researchers. So you’ve “discovered” this, eh! Only 14 years after it was published in the Canberra Times on April 21, 1997. Here’s my letter that was published the next day.

Alan Gale’s report and your headline (“Passive smoking results were doctored, documents say” (CT April 21) defames all the members of the NH&MRC’s working party in its claim that we “massaged” research results and deleted those “which did not suit recommendations”. The ordinary reader, and especially our colleagues in public health research throughout Australia and internationally would be highly likely to form the view that we were scientifically dishonest and engaged in deceptive practices that should bring us into gross disrepute within our professions.

Gale bases his claims on a fax I sent to other members of the group in 1995 where I raised two concerns about an early working draft chapter. First, I argued that “fractional” annual deaths (ie: death rates of less than one per age band) would prove difficult for journalists and the public to understand. When Gale interviewed me for the article, I put to him the simplest of questions that sought to test his ability as a journalist to decipher what “0.5″ deaths per annum meant. His struggled reply was incomplete, thus demonstrating my point. There are many perfectly correct ways of expressing the same data in more comprehensible forms, and my fax urged nothing more than that we should realise that the table would cause unnecessary confusion. I subsequently argued in the committee that we should recast the data in a more understandable way (for example one death every 9 months).

His claim that this means we then “doctored” the data is grossly offensive, damaging to our reputations as researchers and wrong, as the publication of the final report will reveal. It is standard procedure for all draft papers to undergo changes and editing. Often these are to improve clarity.

Second, I pointed out that our very conservative methodology estimated there to be some 93 annual deaths from ischaemic heart disease caused by passive smoking in Australia, whereas a recent American estimate put the US figure at 62,000. Since then the US Environmental Protection Agency has published an 8 volume report (http://www.calepa.calnet.gov/) showing some 65,000 deaths. I advised the committee — correctly — that our report would be therefore “out of step with every international review’s conclusion on this subject”. Without offering a shred of evidence, Gale then implies that the committee somehow as a consequence of this then “deleted” or “doctored” material. In fact, the final report includes the same very conservative estimates which resulted from our only considering domestic (spousal) exposure data in people who have never smoked. We did not factor in workplace exposures, nor deaths among ex-smokers.

My fax rehearsed the sort of questions that we were likely to get from those who were familiar with the much higher US mortality estimates. If we had really wanted to “massage results to suit recommendations” why then would we have persisted in using our ultra-conservative methodology which was guaranteed to produce low estimates of deaths?

Significantly, Gale’s article was run in the week that two private member’s bills on passive smoking are due to be debated in the NSW parliament. The Canberra Times should know better.

I’m sorry if my posting on this list has caused any of you too much excitement. Just have a lie down. It should pass. 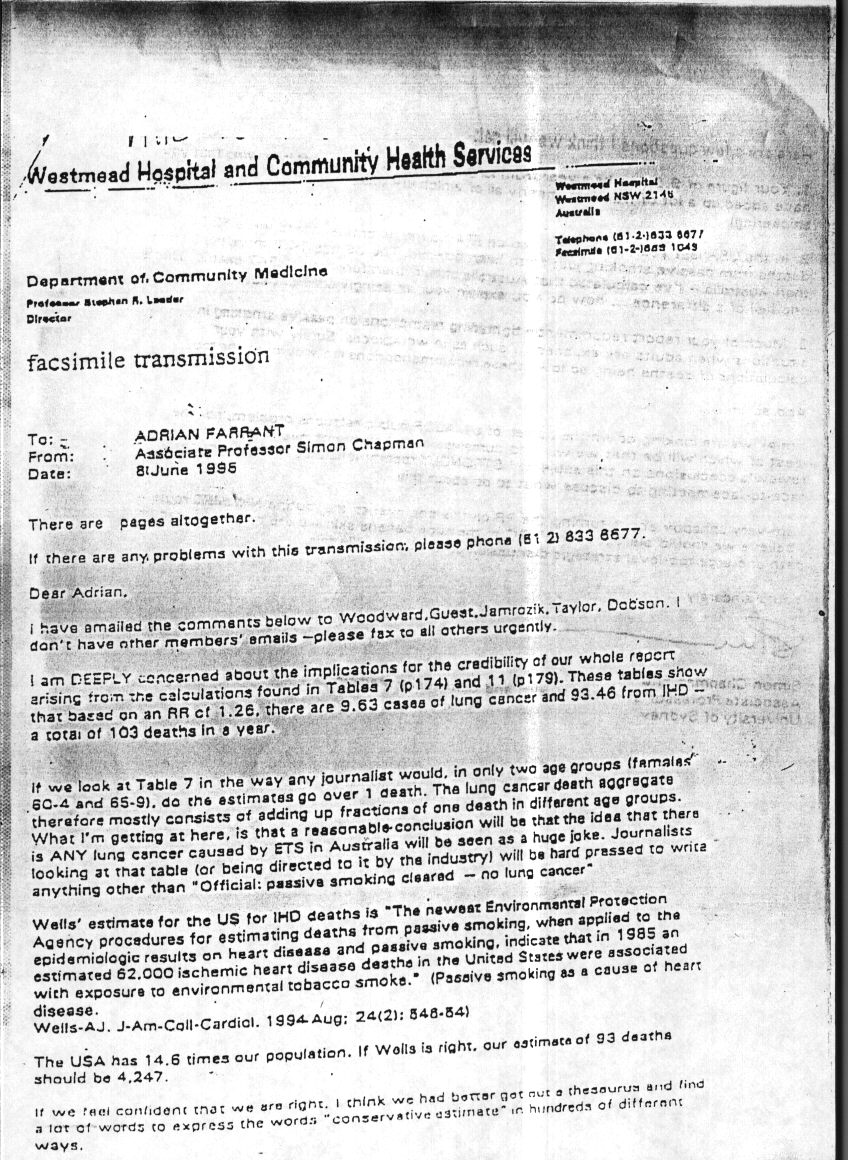 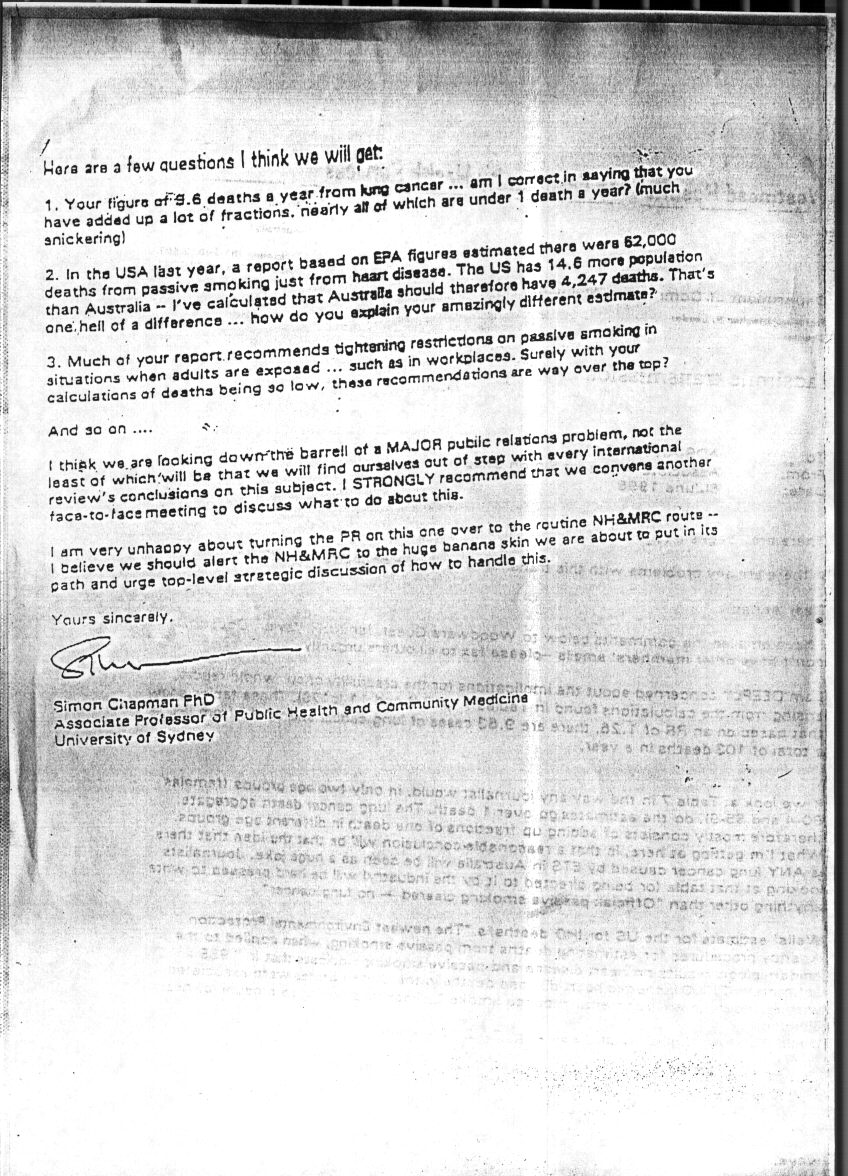